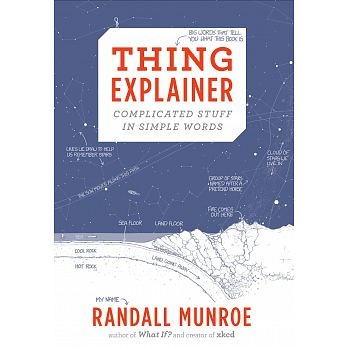 Have you ever tried to learn more about some incredible thing, only to be frustrated by incomprehensible jargon?  Randall Munroe is here to help.  In Thing Explainer, he uses line drawings and only the thousand (or, rather, “ten hundred”) most common words to provide simple explanations for some of the most interesting stuff there is, including:

How do these things work? Where do they come from? What would life be like without them? And what would happen if we opened them up, heated them up, cooled them down, pointed them in a different direction, or pressed this button? In Thing Explainer, Munroe gives us the answers to these questions and so many more. Funny, interesting, and always understandable, this book is for anyone—age 5 to 105—who has ever wondered how things work, and why.

“Like any good work of science writing, [Thing Explainer] is equal parts lucid, funny, and startling.’’—NewYorker.com

PRAISE FOR WHAT IF?

"To reinvigorate your sense of cosmic wonder...breeze through former NASA scientist Munroe's lively answers—peppered with line drawings—to some pretty bizarre questions about life, the universe, and everything else...Extreme astrophysics and indecipherable chemistry have rarely been this clearly explained or this consistently hilarious."—Entertainment Weekly "10 Best Nonfiction Books of the Year"

"Catchy and approachable...There's plenty of scientific rigor behind his elaborate explanations but he punctuates them with sly humor and winningly primitive cartoon diagrams...A cut above so many popular science and technology books."—NPR.org

"Education should aim to teach people to reason confidently about problems that they have never come across before. This book is a great deal of fun, and a masterclass in such reasoning. Like all the best lessons, you only realise you’ve learned something once you’ve finished it."—The Economist

"Munroe takes inane, useless and often quite pointless questions asked by real humans (mostly sent to him through his website), and turns them into beautiful expositions on the impossible that illuminate the furthest reaches, almost to the limits, of the modern sciences…The answers are all illustrated with XKCD’s trademark stick figures...and these are eminently approachable." —Newsweek

"What If? Serious Scientific Answers to Absurd Hypothetical Questions includes old favorites, new inquiries and the mix of expert research and accessible wit that has made Munroe a favorite among both geeks and laymen." —TIME

"Loaded with the same dry wit and blank-faced stick figures that populate xkcd, What If? is that rare book that will have you laughing as you learn just how a mass extinction might unfold."—Discover

Randall Munroe is the author of the #1 New York Times bestseller What If?, the science question-and-answer blog What If, and the popular webcomic xkcd.  A former NASA roboticist, he left the agency in 2006 to draw comics on the Internet full-time, supporting himself through the sale of xkcd t-shirts, prints, posters, and books. He likes candlelight dinners and long walks on the beach. Very long walks. Lots of people say they like long walks on the beach, but then they get out on the beach and after just an hour or two, they say they’re getting tired. Bring a tent. He lives in Massachusetts.

․The Road to Character

․Being Nixon: A Man Divided

․Sustainable Materials With Both Eyes Open

․Mindset: The New Psychology of Success 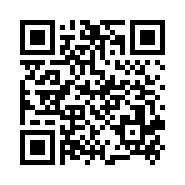